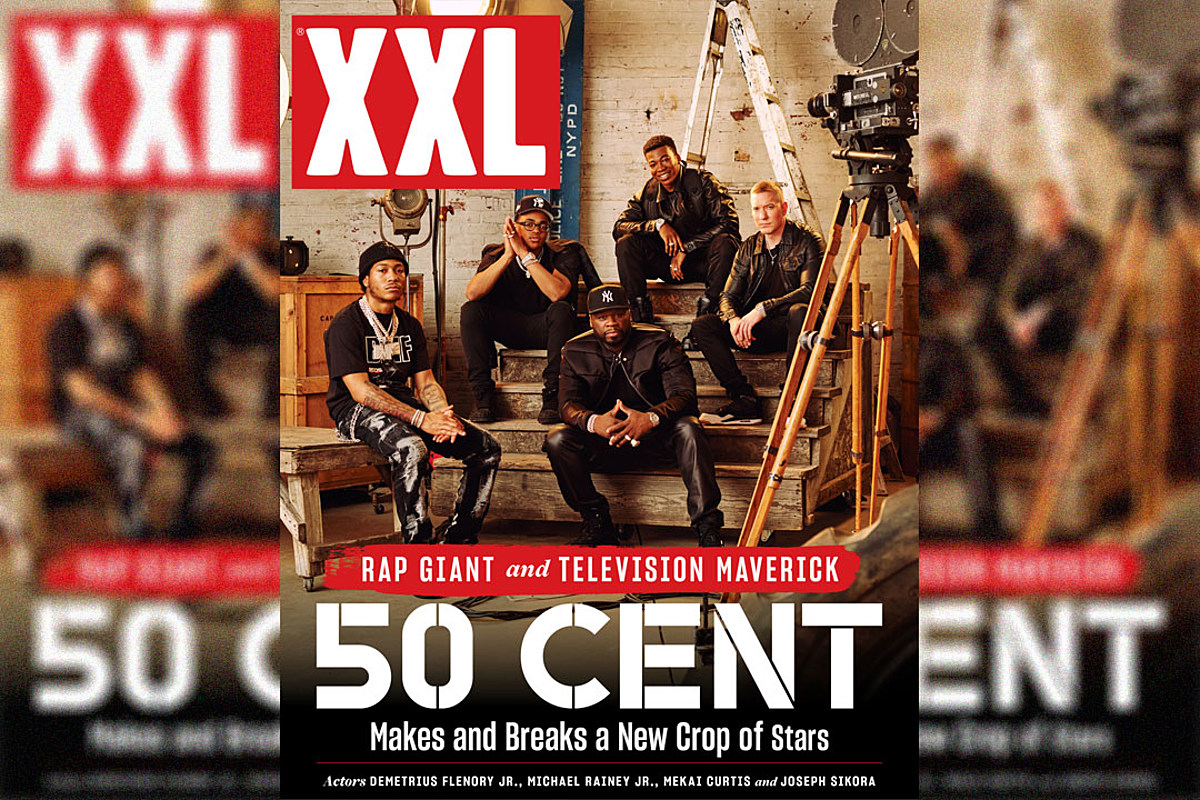 The power of 50 Cent has yet to expire. Nearly two decades past his entrance into rap domination, the Queens-bred hip-hop legend, entrepreneur, actor and mogul has staked his claim as a television maverick. To applaud his success, the accomplished entertainer graces an XXL digital cover with several actors he’s helping turn into TV stars. This includes Michael Rainey Jr., Mekai Curtis and Joseph Sikora, all from 50’s Power Universe, and Demetrius “Lil Meech” Flenory Jr. from BMF.

Fif’s role as TV creator and executive producer began with the show Power in 2014, which he launched on Starz with cocreator and executive producer Courtney Kemp. The successful series, which ran for six seasons, has since launched three spinoffs including Power Book II: Ghost, Power Book III: Raising Kanan and Power Book IV: Force. Fans just caught the first-season finale of Raising Kanan and are gearing up for the second season of Ghost and the first of Force. In the meantime, viewers can currently catch 50’s newest show on Starz, BMF, a.k.a. Black Mafia Family.

With these titles and a slew of other projects coming from 50 Cent, the rapper-turned-TV titan is ushering in a new generation of A-list talent. “I think that they should expect them—[Lil] Meech, Michael [Rainey Jr.], Mekai [Curtis] and Tommy [Joseph Sikora]—for them to be superstars following this,” says Fif during the cover shoot, which took place in early September at The 1896 Studios & Stages in Brooklyn.

Power Book II: Ghost stars Michael Rainey Jr. as Tariq St. Patrick, a youngin’ who found himself neck-deep in the world of hustling. Speaking about his role, Rainey Jr. refuses to fumble the opportunity to thrive as a Black actor. “We have our shows that are based around us and our characters,” he shares. “So, all of that stuff pushes us to all work harder and just keep coming out swinging and do better every episode.”

Another actor who got their big break under the wing of 50 is Mekai Curtis. In Power Book III: Raising Kanan, he plays the younger version of Kanan—television’s most ruthless street cat, played by Fif. Mekai Curtis gives the hip-hop and entertainment juggernaut his due flowers. “You saw something and you made a hit out of it,” Mekai Curtis tells 50 Cent. “Everything you touch turns to gold.”

50 Cent’s eye for talent has no limits. He’s not afraid to take a chance on people and takes pride in elevating them to the top. Joseph Sikora, a Power fan favorite known as Tommy and the star of Power Book IV: Force—a show about the kingpin taking his talents beyond the East Coast—recalls being empowered on each set over the last eight years. “Fif lifts himself up and he lifts us all up with him,” Sikora adds.

Demetrius “Lil Meech” Flenory Jr. has a different task at hand than everyone else 50’s embracing. Flenory Jr. portrays his father, Demetrius “Big Meech” Flenory, in BMF, a show about the once-flourishing and legally stifled Detroit and Atlanta-based drug and money laundering empire known as Black Mafia Family, also led by Flenory Jr.’s uncle, Terry “Southwest T” Flenory. After various castings to find someone to play the role of Big Meech, 50 Cent knew there was no one better than Lil Meech himself to play his father. The rapper paid for Flenory Jr.’s acting lessons to prep the acting rookie for the role. “It’s like life or death for me,” Flenory Jr. expresses. “I feel like because that’s how serious I take it. Not even more so with the job itself. Just so with me telling the story right because [my father’s] still in jail.”

Despite the career switch, Fif has never abandoned his rap roots, which shines through in his multiple Starz series. Respected artists like Kendrick Lamar, Method Man, Joey Bada$$, Snoop Dogg and more have all made cameos or starred in the various Power shows. And each series features an opening theme song performed by 50. Power and Book II’s credits open with 50’s “Big Rich Town” featuring Joe. Raising Kanan’s theme is 50’s “Part of the Game” with NLE Choppa and Rileyy Lanez. BMF includes “Wish Me Luck” with 50, Snoop Dogg, Moneybagg Yo and Charlie Wilson.

In addition to the Power Universe and BMF, 50 has 16 more television projects in the works. On ABC, there is the comedy Family Affair with Mary J. Blige and a hip-hop competition called Unrapped. On Netflix, Fif’s got The 50th Law with Kenya Barris. On Paramount+, the rap star is working on Twenty Four Seven, a program about the NYPD’s hip-hop cop Derrick Parker, adapted from his book, Notorious C.O.P.: The Inside Story of the Tupac, Biggie, and Jam Master Jay Investigations from NYPD’s First “Hip-Hop Cop.” On Starz, 50 is working on Angel’s Playbook based on the career of sports agent Nicole Lynn and a series about the life of Cyntoia Brown-Long called The Case of Cyntoia Brown.

When he’s not pitching new shows, 50 is refining his skills as a thespian. He’s currently shooting The Expendables with Sylvester Stallone, Jason Stratham and Megan Fox and has a three-picture deal with Eli Roth’s 3BlackDot, all of which extends Fif’s already lengthy resume. And then there’s always the music.

MICHELLE Share Video for New Single ‘MESS U MADE’

Richard E. Grant says the Duchess of Cornwall helped him after...