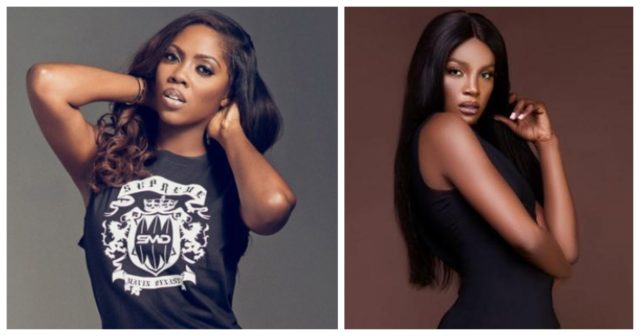 With the present clash in the music industry between Nigerian female artistes, Tiwa Savage and Seyi Shay, we bring to you an interview Seyi Shay had in March 2016 with Ebuka Obi Uchendu on Rubbin Minds.

This interview might be one of the interviews Tiwa Savage mentioned during her clash with Seyi Shay on the 8th of June 2021 where say stated that Sey Shay was speaking negatively about her.

In this interview, Seyi Shay stated that she does not know Tiwa Savage, at least not personally and she also revealed that she had never reached out to the MaLo singer for reasons not revealed but promised to do so when Ebuka probed.

“I don’t really know her” When asked if they have met before, she said “of course… like i said, I don’t really know her personally, i don’t have many friends in the music industry. They’re my colleagues and we say hello we say goodbye, we invite each other to different things and functions, that’s how it is with the females in the industry.”

When asked if she had reached out or tried to reach out, she said;

“hmmm, I will though, it’s a good idea, I will reach out this year,” When asked why she had never reached out to Tiwa Savage, she replied with “I don’t know, maybe you should ask her”

It is also important to note that in this same video, Seyi Shay also commended Tiwa Savage’s music and Mavin Records, stating that they have fantastic artistes, and Tiwa Savage was still with Mavin records.

Watch the video below;

Nikola Jokic Gets Ejected After Hitting Cam Payne In The Face...