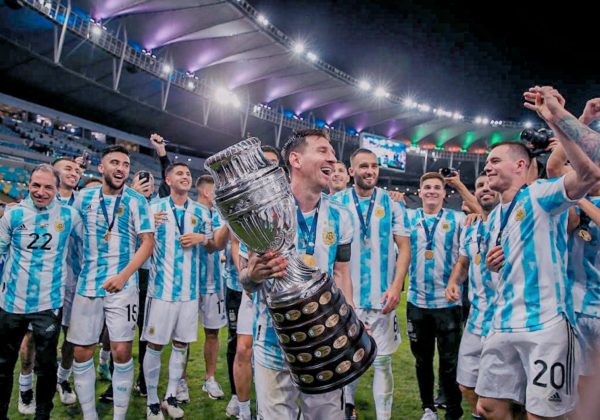 Lionel Messi was mobbed by Argentinean fans in Florida, Miami as he was spotted in a cafe during his vacation in the United States on the 16th of July 2021.

The Barcelona ace was having an enjoyable time in Miami when a fan noticed him, and then it turned into a disaster. Some fans flashed camera lights in his face and they intruded on his private space. Messi is a tight-lipped celebrity, and it’s essentially because he tries to avoid being ambushed by fans just like it happened on this occasion. He almost got hurt as he was surrounded by hundreds of fans who wanted pictures. His security crew tried their best not to get out-muscled by the pouring fans who were dying to see the goat.

Messi is on a three-week holiday following Argentina’s success in Copa America. He led the team as they beat Brazil in the final, winning the highest goalscorer and player of the tournament, outperforming everyone by a clear mile at the age of 34.

Since his Copa America heroics, wherever he has stopped, people have demonstrated an incredible amount of love and appreciation to him for bringing back glory to his nation after 28 years of failure and Miami wasn’t different.

Miami has one of the biggest Argentine communities in the world. South Florida is also one of the locales that many of them visit frequently. And it was at this area that the fan who made Messi’s location public saw him.

The Barcelona idol is not the only superstar currently holidaying in Miami. Players like Paul Pogba, Romelu Lukaku, and Paolo Dybala have been spotted in the coastal city as it is a safe space for players to get away from the pressures of their stardom.