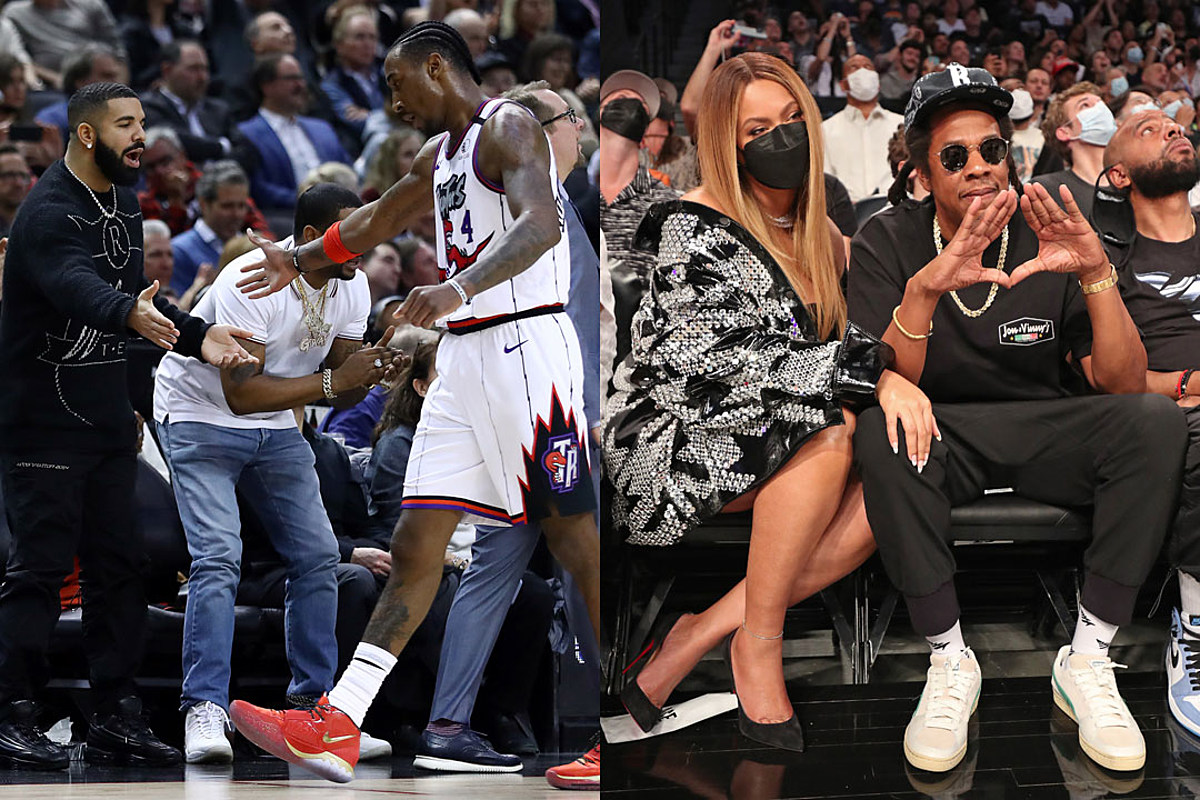 Basketball and hip-hop have a long, storied history, as both were molded by Black culture and built upon by Black people. Couple that with many rappers having hoop dreams themselves, growing up playing the game and being fans of NBA players, and the marriage has continued on for decades. From Kurtis Blow’s classic 1984 single “Basketball,” to Porky Pig rapping in the LeBron James-helmed sports film Space Jam: A New Legacy, rappers and basketball players have a mutual respect for each other. As the 2021 NBA Finals come to a close, XXL highlights some rapper and NBA franchise relationships over the years, from part-owners to super fans.

Drake and Jay-Z are the biggest modern-era rappers to get involved with NBA teams. Drizzy became the Toronto Raptors global ambassador in 2013, and made his mark on his home team. The team has played in OVO jerseys, he’s partnered with them on local community outreach, and he famously joined the team on their parade float after their 2019 championship win. Meanwhile, Jay-Z became a Brooklyn Nets minority owner in 2004, and was instrumental in the teams move from New Jersey to Brooklyn. Also invested in the Barclays Center, the team’s home arena, Jay was frequently seen at games before and after he sold his stake in the Nets in 2013, avoiding a conflict of interest with his own sports agency, Roc Nation Sports. Most recently, he, alongside his wife Beyoncé, was present for a home game when the Milwaukee Bucks played against Brooklyn Nets for Game 1 of the Eastern Conference semifinals in June.

The Atlanta Hawks had a great season this year, reaching the Eastern Conference Finals, led by their star point guard Trae Young. The Hawks have plenty of famous fans, but two of their most notable ones are Georgia natives 2 Chainz and Quavo, one-third of Migos. In 2019, 2 Chainz bought into the ownership group of the College Park Skyhawks, the Hawks G-League affiliate team, which also reps his hometown. He attends Hawks games regularly and has been honored with his own night where he performed. Quavo has done the same. The Migos member has been the more visible of the two recently, sitting front row and cheering on the team throughout the NBA Playoffs. He’s also built a close friendship with Trae Young and has even gifted him a chain adorned with the words “Ice Trae.”

Take a look at the hip-hop connection to NBA teams below.